Theatre program began in Lviv Opera House from the new opera “Coriolanus“ on the play by William Shakespeare (premiere performances took place on November 29, 2014 in Kiev and was one of the main theatrical events of the season). Director and project leader Vlad Troitsky compares the events of Shakespeare’s tragedy with the events in Ukraine today. Experimental directorial and musical findings, innovative art tools and stage treatment combined with classic space structures.

The program reflected the current transformations taking place in Ukrainian society. The play “The fear in Ukraine”, which became today’s sketch of Ukraine “On Fire” created by Georg Genoux – German director, co-founder of the opposition experimental theater “Teatr.doc” (Moscow), which since 2014 worked a lot on Donbas.

One of the joint projects of the German playwright and Natalia Vorozhbyt was documentary performance “Mykolaivka“, where the children, pupils of 9 – 11 grades who survived the bombing of their town in Donetsk region, were the authors and performers of their frank, deep, talented monologues. During the Forum, director Georg Genoux and psychologist Olexiy Karachynskyi also worked with immigrants from the East, now living in Lviv. At the end of the Forum, their work was shown in the «workinprogress» format in the documentary play “Immigrant’s Theater”. 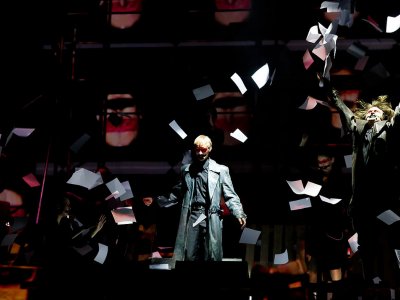