With the support of:

“City Studio” – urban project,
the German Society for International Cooperation,
Municipal development and renewal of the old city of Lviv and Lviv City Council,
the NGO “East and West together”.

According to statistics, more than two thousand families moved from the occupied territories to Lviv. A large number of children and youth occured to be in a new city, in other circumstances and environment. This aspect is crucial, as concerns one of the most vulnerable categories – children and youth.

The purpose of the educational program “DONKULT” was in solving the problem of adaptation and understanding, offering young people the opportunities for development and implementation.

An educational program for children and teenagers was presented by project “Your / My stories”, centered around the theme of the city: urban stories and legends, looking for new ideas to create a comfortable and friendly urban environment. The main purpose of activities designed for different age groups of children was creating spaces where children and youth could in a funny way share personal experiences, telling stories of their cities.

During the Forum, Kharkiv artist Roman Minin (a native of Donbas), who recently implements social projects in public space, worked with children on painting of the front wall of children’s library of the city. The authors and performers of the project were more than 20 children aged 8 – 12 years old of Donbas and Lviv. 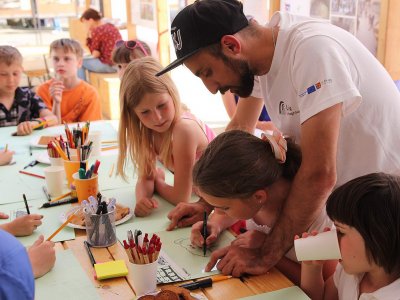