The First Cultural Exchanges Program
The first meeting, Zakarpattia, May 24-26

What did we do in Zakarpattia?

Round table on "Regional socio-cultural forums. Experience and prospects".

For cultural managers who more familiar to modern urban discourse, this immersion into the traditional discourse was also an important experience that gave new optics.

Acquaintance with locations and potential partners of the future SlobodaCult Forum.

Creating the first sketches of future programs in the areas of: visual arts, literature, cinema, and lecture and discussion program. Both interregional cooperation and cooperation between the directions were important. The co-authors answered provocative questions from colleagues, listened to critical remarks and advice. We also saved and discussed the first versions of the programs at the meeting in September.

During these three days, interregional working groups were formed, which further worked on the programs of the SlobodaCult Forum. 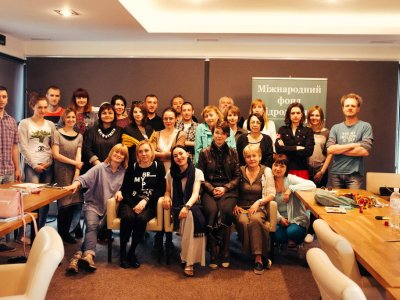 The First Cultural Exchanges Program | The first meeting, Zakarpattia, May 24-26