Kharkiv became the working centre where, in fact, almost the entire Sloboda part of the forum came from, but we also had a fantastic trip to the region.

For representatives of Zakarpattia, perhaps the greatest discovery were the landscapes of Eastern Ukraine – from vast fields and steppes – to the cretaceous mountains and pine forests. Participants from Zakarpattia, Lviv and Chernivtsi were very impressed by the road from Sviatohorsk to Kramatorsk. However, at the same time we saw checkpoints, abandoned and shot buildings (we should note that it was 2017).

In addition, one of the most important impressions was a large number of modern public initiatives in small towns of Kharkiv and Donetsk regions (including those occupied in 2014); and a rich cultural heritage that confirms that Sloboda Ukraine has always been deeply integrated into Ukrainian cultural discourse. Well, of course, there is much evidence of Russian imperial and Soviet discourse.

What did we do at Sloboda Ukraine?

The guests told what cities and spheres of culture they represent and how they can be useful to people of Slovyansk and vice versa, got acquainted with local activists, who also invited us to the platform of initiatives like "Teplytsia", Shovkovychny Park, Slavkurort and Semenivka district, which suffered the most during military actions.

Kharkiv, Come.in Gallery – we had a powerful brainstorming, which resulted in drafts of all programs of the future SlobodaCult Forum. Kharkiv curators and their partners from Zakarpattia discussed stereotypes, specific local cultural features and common contexts. 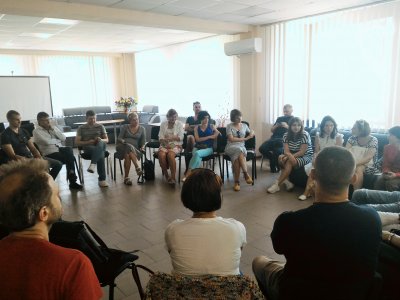