Based on the survey provided by the Institute of World Policy in 2015, there is no any cultural elements or notions with which Ukraine would be associated among the population of the largest EU countries. To contribute to the solution of the problem, we developed the concept of the project according to the belief that culture is an important socializing factor that gives citizens a sense of pride and belonging to their country and community and to the citizens of other countries it gives the understanding of values of other cultures and values of the global cultural process. The main objectives of the Residency will be communication between European and Ukrainian artists and cultural activists, exchange of values and cultures through the means of arts, the presentation of Ukraine’s rich and diverse heritage. In a long-term, we count on the demonstration of such projects in the EU as tools for breaking down stereotypes that Europeans have about Ukraine and vice versa.

The project consists of the two stages:

the Seminar for curators to create the concept and invite participating artists;
and the Art Residency itself, which will result in at least ten international and interdisciplinary cultural and art projects later to be hosted by partner institutions in the participating countries.

During the first stage of the program on November 2-6 2017, twenty four cultural managers and curators from 11 European countries (Austria, Hungary, Germany, Poland, France, Spain, Italy, the Netherlands, Belgium, Portugal and UK) are invited to the Carpathian village of Tatariv in the «Koruna» mountain resort for a 5-day seminar to develop the common vision of the Art Residency «Like U». As a result of an open call in May 2017, we received around 70 applications and selected 24 curators from above-mentioned countries representing strong institutions for collaborations. The program of the seminar includes presentations of Ukrainian arts, discussions, excursions, brainstorming and signing the declaration of intent based on the common vision of the multidisciplinary art-residency. The main objective of the seminar is to create together the project of the residency for the 50 artists in different fields. They will be invited to the three-week residency in Tatariv village to create common cultural products together in late 2018. Also, we expect to create a common application for the Creative Europe program in early 2018.

The second stage of the project, the Art Residency itself, will take place in November 2018 in the Tatariv village as well. The activities of the residency will comprise the following fields: cinema, visual arts, music, sculpture, land art, theatre, art management and culinary. Artists, cooks and cultural managers from different regions of Ukraine and EU Member States will meet and work together for three weeks. This is expected to result with exhibitions of visual art, documentary films, land-art objects, documentary theatrical pieces, a cooking-book and, most important – strategic plans of a joint long-term art project in EU and Ukraine designed by artists and art-managers from the partner institutions. Participants from the EU will be able to get to know Ukraine through direct acquaintance with its nature, cultural heritage, their Ukrainian colleagues and local village community. The final cultural products will be the result of interpretation and personal impressions about Ukraine’s culture of the invited artists. The results of the residences can be presented in the countries of residents throughout the whole 2019 year.

Photo galleries of the project(1) 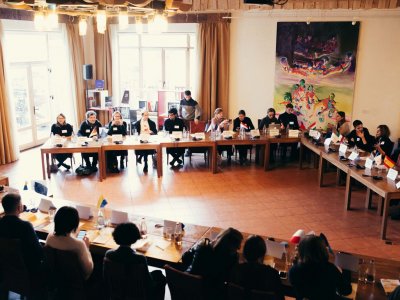 Artists Residency «Like U» | The international seminar “European Cultural Residences”